skip to main | skip to sidebar
"Every man is a damn fool for at least five minutes every day; wisdom consists in not exceeding the limit." Elbert Hubbard

It's that time of year again. The farmer's markets are open. Yesterday was the first market day of the season here in Barnegat. Pictured below are some of the delicious things that were available, all grown here in New Jersey, not shipped halfway across the country. It's a beautiful thing to get to know the people who actually produce what you eat, to talk to them face to face and let them know how much their efforts mean to you.

I can't understand not having a personal relationship with the good folks who bring food out the earth. For too much of my life I knew nothing about what I ate except that it came from the store. Not anymore. 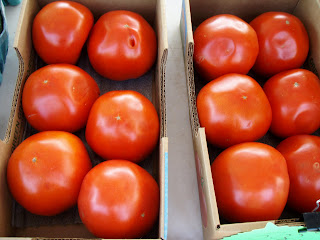 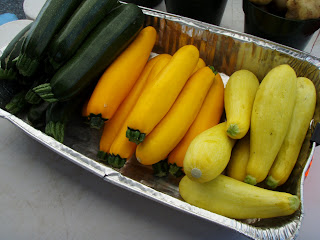 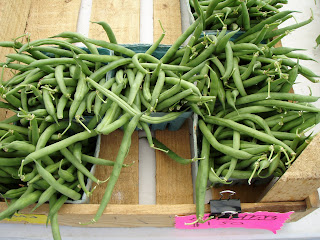 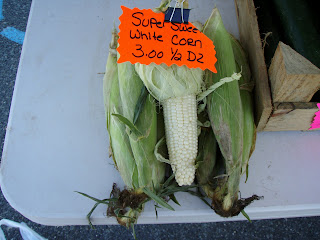 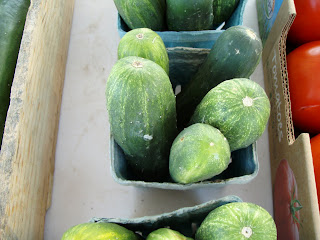 Next week I'll be picking up some of these cucumbers and try my hand at making my own pickles. It's much easier than you think. What's better than eating food you produced yourself? 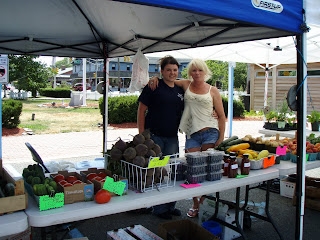 I didn't catch their names, but here are the two lovely ladies running the stand I stopped at. That's okay as I will be back next week and bring them a sample of what I baked using the honey purchased from them. I did converse at length with the young lady on the left. She's pursuing a career in culinary arts and is starting at the same school I am looking at attending next year. We also knew some of the same instructors as she just completed school where I took courses this past spring. 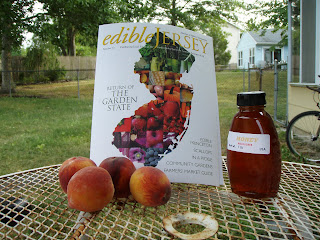 I only had enough cash on me for some wildflower honey and peaches, the first pick of the season. I had one today and it was wonderful.
To make my day better, a suprise was waiting for me at home. I recently subscribed to Edible Jersey Magazine and my first issue was in the mailbox. They even sent me the last issue as a bonus. It's published quarterly, following the seasons. The summer issue has stories about scallops from off the Jersey coast (and the hard working fishermen who bring them in), Hopewell Valley Vineyards, and pickles (including how to make your own).
Just more reasons I'm settled here and never leaving. As for the blueberries from my previous post? My home is filled with the scent of fresh baked blueberry bread.
"You don't have to cook fancy or complicated masterpieces - just good food from fresh ingredients." Julia Child
Posted by Old Sarge at 8:07 AM 2 comments:

Blueberries and my #@!&ing kitchen 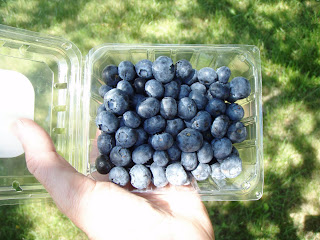 Once again it's blueberry season here in New Jersey. I wish I had a freezer so I could put a couple of flats of blueberries away and have them year round. Eventually, when I gut my kitchen and turn it into something that I can really work in, along with a separate pantry including the aforementioned freezer and plenty of storage.

The original owner of the house did nothing to the place. No big deal, except that the amount of work space in the kitchen is miniscule. This house was built in the early Seventies when it was all tv dinners and frozen crap. No one needed or wanted counter space to work on. I literally have to juggle to do the prep work for real cooking and baking.

I hate it. To quote my friend Morphy, "I hate, hate, stabbity-stab, absolutely hate it!"

I can picture what I want in my head. The stove, sink, and dishwasher will remain in their locations because moving any one of them will require way too much trouble. Knocking out walls and re-routing water and electric lines. If I go whole hog, it will require gas being installed in the house for a combo gas/electric oven. Electric for the oven and gas for the stovetop. As it is I will be closing off a door and moving it into another room for access to the laundry. This will allow me to almost triple my counter and cabinet space. The kitchen table goes. To be replaced by an island with electric installed or a very large butcher block. Instead I'll just add some raised counter space with a few high stools and a view into the back yard for an eating area.

I haven't yet been able to picture the pantry/storage area. I do know it will be in another room. Either I greatly enlarge the laundry room or cut the mud room in half.

When (and I emphasize when) I'm done, I will have a real working kitchen that I can do large amounts of baking in, along with canning and preserving. And I'll finally be able to have friends visit and treat them with proper hospitality.

But for now, back to the blueberries, the official state fruit of New Jersey. If you live here or are in the area this month and want some, go out and pick your own. There's baking to be done.
Posted by Old Sarge at 6:45 AM 3 comments:

Memorial Day, when we honor our dead and their survivors. Those who didn't make it home, those who have passed on since, and the families left behind.

Here in Barnegat, we had two days of ceremonies. On Sunday we honored the fallen and were proud to officially present a brother with long overdue recognition for brave deeds from forty years ago. Monday was celebrated with a parade and barbeque at the American Legion hall. 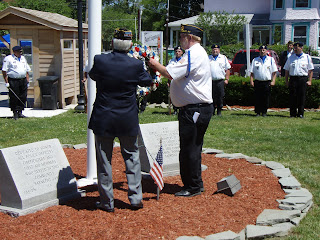 VFW Post 10092 Commander and American Legion Post 232 Commander laying the wreath at the Barnegat memorial to veterans, fire-fighters, police officers, and emergency medical technicians. We had a small crowd in attendance, which I did not get any pictures of unfortunately. Our neighbors, friends, and family; we are grateful for their support. 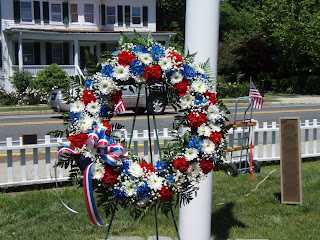 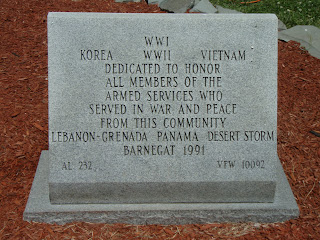 We remembered the fallen, but also honored a comrade in our ranks, affectionately known as "Captain Jack" . 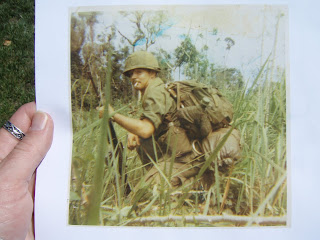 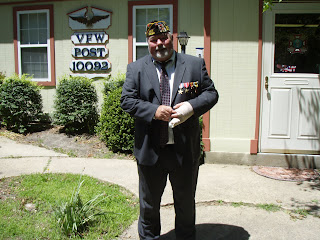 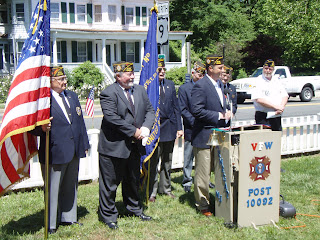 CPT Jack being presented with his medals by his son, also an officer in the US Army and Iraq veteran. In attendance was his father-in-law, the oldest member of our VFW Post at ninety-seven years of age, a B-17 bomber pilot in WWII.
These four medals were for actions committed forty years ago in Vietnam. The Silver Star, Bronze Star, Vietnam Gallantry Cross with Palm, and Vietnam Wound Medal with two Oak leaf clusters.
1LT Monahan was a Mortar Platoon Leader with A Company, 5th Battalion, 7th Cavalry Regiment, 1st Cavalry Division. The Bronze Star Medal was awarded for his service in Vietnam and Cambodia while the other three were specifically for his actions during 19-25 May, 1970.
In essence a platoon from his company was pinned under extremely heavy fire and taking severe casualties. He fought his way forward through enemy fire with several other soldiers carrying much needed supplies. Discovering that the leadership of the platoon was killed or wounded, he assumed command and was wounded several times during the day from both enemy fire and napalm while directing artillery and airstrikes danger close to his own position, managing to keep from being overrun by the enemy. After the better part of a day, he was able to move the platoon back to the company position and finally accepted medical aid for himself.
In the most important words of the citation, I quote: First Lieutenant Monahan's valorous actions are in keeping with the finest traditions of military service and reflect great credit upon himself and the United States Army.
I cannot do credit to the narrative of that day. His son read to us a full and proper account of the battle in detail. We are honored to count him in our ranks. CPT Jack left the Army in 1971 and served with both the Army Reserve and Army National Guard until 1982, when he retired from military service.
On Monday we had our parade which I marched in for the first time. Which unfortunately means I did not get any pictures to show here. It was a good event nonetheless, excepting whoever set off a firework as the veterans marched past. It went from downtown Barnegat, up Route 9 to the American Legion hall, where they graciously hosted a barbeque for the marchers and viewers. I met more of my brother veterans and several friends. Had some food and was also introduced to kind people who offered assistance if I need it in taking advantage my veteran's benefits.
I'm glad I moved here and decided to stay after returning from Iraq.
With malice toward none; with charity for all; with firmness in the right, as God gives us to see the right, let us strive on to finish the work we are in; to bind up the nation's wounds; to care for him who shall have borne the battle, and for his widow, and his orphan...

Old Sarge
The Jersey Shore
Veteran (28 years, been there, done that), scribbler of words, amateur cook and baker, film snob, bibliophile, imbiber of scotch, beach bum, Noo Yawkuh no matter where I live.

THE SACRED UNIVERSE: Earth, Spirituality, and Religion in the Twenty-first Century by Thomas Berry

Show a soldier you care

Not just for veterans

Weather down the shore